Rodney Noskiye a Proud Member of the Class of 2014

Rodney Noskiye arrived to the West Kootenay from his isolated Northern Alberta community in 2011 in search of new opportunity. When he enrolled at Selkirk College’s Castlegar Campus as student, the vibrations of culture shock were fresh.

A graduate of the Social Service Worker Program in 2014, Noskiye is back in Alberta working in Cold Lake as a social worker by day and teaching Cree language classes at night. The journey to get to get this point of his life has been filled with hardship and struggle, but today the 36-year-old is proud to be making a difference in lives of others. 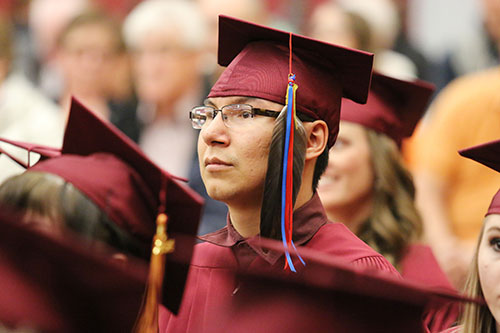 Selkirk College alumnus Rodney Noskiye at the 2014 convocation ceremony on the Castlegar Campus where he graduated from the Social Worker Program. The 35-year-old now works in Cold Lake, Alberta as a social worker during the day and teaches the Cree language to learners in his spare time.

“Selkirk College has given me a voice,” says Noskiye. “When I was a student, people would come up to me and ask for my input. Everybody was patient and I never felt judged, it gave me the confidence and made me feel like I belonged. That voice that I never had is important for me now, I make sure to tell everybody that it is Selkirk College that gave me that voice.”

Read the entire story at selkirk.ca.

Learn more about Indigenous Services and join us on Twitter.